I thought I was done blogging for a few days.  Given the pace we’ve been moving since we arrived in Zanzibar, it didn’t seem likely that we had enough to write about…but then, this morning we SWAM WITH DOLPHINS. 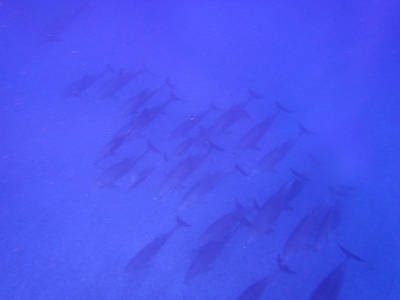 A pod of dolphins swimming underneath us!

We’ve had some incredible aquatic experiences on this trip – swimming with Iguanas and Sea Turtles in Galapagos, having dolphins race our boat, feeding the humpback dolphins in Australia, visiting the Great Barrier Reef…but this one will be hard to top.

We set out early in the morning in a small plastic boat on fairly choppy seas.  I prepared myself for only seeing dolphins from a distance as the couple from our resort told us they did yesterday.  We were told that the dolphins had been spotted in the morning fairly far out, so they motored out over the waves that were sometimes as big as the boat.  And then we saw our first dolphin.  Not skimming the waves, but leaping 12 feet out of the water, and flipping over.  Then another followed, performing another aerial maneuver, and then a third.  While I’ve seen them do that in aquarium shows, I didn’t think I’d ever see it from wild dolphins. 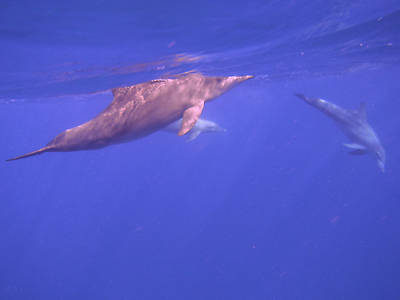 And swimming right past us!

Moments later, we were told to put on our masks and fins and jump in to the water.  As soon as I got in, I saw the dolphins.  The pod was 40 or 50 strong, and while there were several at the ocean’s surface, the majority swam underneath.  There were dolphins of all sizes, including several babies.  They looked like they were barely moving, but it was impossible for us to keep up to them in the water, and so we had to jump in and out of the boat a few times to catch up.  Apparently, whether you can swim with the dolphins depends on their mood…if they’re hunting, or otherwise indifferent, they will just turn on the jets and you can’t get close.  But we had luck on our side, and the last time we jumped in the water, a large dolphin actually came up towards the surface right between Megan and me, and then swam a complete circle around us looking directly at us the whole way around.  It was absolutely incredible.

Things we have learned on this trip: No matter what is going on, dolphins and great apes always make the day amazing.

I’ve had to scramble to come up with video for this, since this wasn’t scheduled on our original playlist, but fortunately, one of my favourite songs from my university days fits the theme of today’s blog nicely…Here’s The Dolphin’s Cry, by Live.  And the YouTube video even has much nicer photos than I managed today!