The seaport of Çanakkale

In the last few days, we have walked in the footsteps of such notables as Agamemnon, Priam, Hector, Helen, Alexander, Augustus, Trajan, Hadrian, St. John, St. Mary, Constantine the Great, Brad Pitt. With Turkey, history has been the central flavour of our trip (although food probably deserves an honourable mention).

We started in Istanbul where we met up with our tour group, but did not have a lot of time to explore that city yet…that’s coming again in a couple of days.  Along with one of our newfound friends, I went exploring in the evening, visiting the Hagia Sophia and the Blue Mosque for some night photos.  The next morning we set out, headed to the Gallipoli Peninsula, where for nine months, the Turks battled the forces of the British, French, ANZAC & Newfoundland.  It was a moving experience – standing on the beaches, walking along the trenches, and visiting the gravesites of hundreds and hundreds of young men.

The next day was the site of another famous battle, as we visited the excavation site of the city of Priam & Hector – Troy.  We were warned ahead of time to adjust our expectations low, but I really enjoyed the visit.  It seemed easy to picture the streets where Paris led Helen, or look out over the fields to where Agamemnon, Achilles & Odysseus were encamped.  We finished that afternoon at the town of Ayvalik, where we took a boat out on the Aegean Sea for sunbathing and swimming (very cold water!)

Yesterday we started late and made our way to Sirince, a cute little village who’s name means “charming”  (it replaced the town’s earlier name of Cirkince, which means “Ugly-like”.)  There we tasted local wines, visited a small ancient church, and wandered the marketplace, buying some ice cream from a guy who provided us not only with the dessert but also with an entertaining display of showmanship.

Today has been the pinnacle so far though.  We started by visiting Ephesus, a town that had its roots in the Greek Era, was visited by Alexander the Great, and became a major centre for trade during the Roman Era.  The ruins are in much better shape than those at Troy and so there’s a lot of the city that still stands.  Despite being the most over-crowded spot we’ve come across possibly on our entire trip (there were three cruise ships that pulled up this morning apparently), it was a pretty amazing stop and the tourists just served to show what it might have looked like when it was a bustling Roman city. 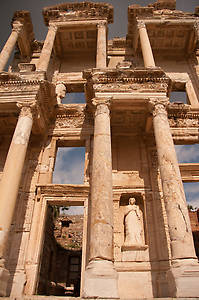 The Library of Celsus, Ephesus

After that, we visited what is left of the Temple of Artemis – one of the Seven Wonders of the Ancient World.  In 356 BC, a tailor named Herostratus decided that he needed to be famous and since there were no reality TV shows at the time for him to join, he did the next best thing and burnt the temple to the ground.  Legend says that Artemis was preoccupied at the time so couldn’t help her temple…she was in Macedonia witnessing the birth of Alexander the Great.  Alexander would later visit the ruins and made an offer to the people of Ephesus to rebuild the temple, just as long as they put his name in prominence on the completed project.  The clever Ephesans declined politely, telling Alexander that it was unseemly for a god to build a temple to another god.

After lunch, our group split up for a few hours and Megan and I decided to explore the ruins of the Cathedral of St. John.  Jesus entrusted the care of his mother to St. John (the Disciple or the Evangelist, not the Baptist), who fled Jerusalem after his brother and fellow Disciple James was martyred by the King.  He moved with Mary to Ephesus, and after his death, Constantine, the Roman Emperor who converted the empire to Christianity and who moved the capital from Rome to Constantinople, built the first Cathedral to him on that spot.  Another emperor, Justinian, erected an even larger Cathedral in the same spot and if it had not fallen in to ruins, it would be the seventh largest cathedral in the world today.  Even in ruins, there’s a majestic beauty in the spot.

Tomorrow we head on to Pamukkale, where hot springs have formed some bizarre rock formations which gave the site its name – which means Cotton Castle.  After that, back to Istanbul to do that city justice with a day and a half of exploration.

In honour of Turkey, here’s today’s song.  Warning:  It’s another that you’ll never get out of your head…