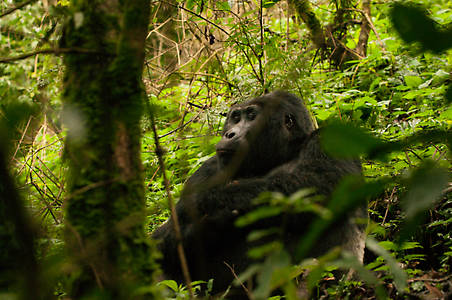 We’ve been hiking for two hours, our hands are torn from thorns, our feet soaked in mud.  We’ve gone seemingly straight up the side of a mountain, scaling a cliff along the way and we’ve just pulled ourselves through a dense thicket.  We’re running on only 7 or 8 hours of sleep over the last two nights, wearing the same clothing we’ve had on since our last day in Dubai as Kenya Airways has lost our bags…and yet, at this moment, we feel great.  We’ve just walked in to a bit of a clearing in the jungle and there are six gorillas around us, among them three silverbacks including the dominant male.

This is only a small portion of his troop.  He reigns over 23 gorillas, including the two silverbacks we saw plus one other.  While it helps him protect the troop to have the extra muscle around, eventually they are likely to try to take over control.  For now though, all seems pretty peaceful.  Everyone is just foraging for food and the big males take little notice of us. 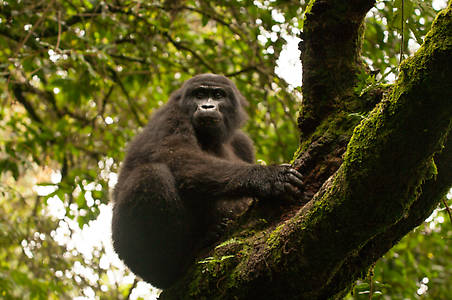 A little later on and we’ve followed the dominant male up in to the woods. He’s eating bark, scraping it off the tree with his teeth while we sit not 10 feet away.  Having broken off a large section, he walks towards us, turns around and sits down maybe 7 feet away now, facing the same way as our group as if trying to see what we’re all looking at.

Later still and our hour with the great apes is up.  We go to leave, and I move to walk under the female we’ve been watching fishing for ants.  Too close.  She gets up and turns around and the guide cautions me to be still.  I slide down the steep slope in the loose mud and twigs and the gorilla decides she’s had enough.  She walks down right past me and strolls in to the woods.

So here’s the song for gorilla tracking…another with a wonderfully cheezy video!