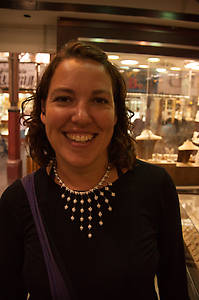 Just like that, our stay in Dubai is almost over.  The Raffles Dubai is possibly the nicest hotel I’ve ever stayed in.  Inspired by Ancient Egypt, the exterior and lobby are full of pyramids, hieroglyphs and images of pharoahs, and they’ve treated us like gold here.  Fitting in a city known for that precious metal!  We went yesterday (after a rare sleep-in morning) to the Gold Souk, a market where they sell an incredible amount of jewelry.  Megan tried on a bracelet worth around $4,000 and a necklace that was worth $30,000 before settling on a pair of earrings that didn’t approach either of those prices.  Next it was the Spice Souk, where we walked out with a bag of cashews and some delicious candy that looks like small rocks but tastes like a heavenly mixture of chocolate and caramel. 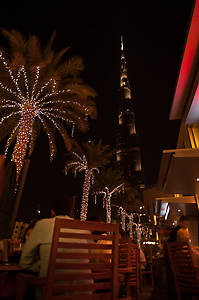 After visiting the Fort and Dubai Museum, it was off to the world’s tallest building, Burj Khalifa (pronounced like “birch ha-leaf-a”) for some astounding views of the city.  We finished the night off by taking a cab on a bit of a city tour so that I could take photos of some of the more famous sights.  Today, we’re going to be doing a desert safari…which from what I can tell consists of 4x4ing over sand dunes, riding camels and having a BBQ in the desert.

Early tomorrow morning, we leave Dubai, headed to Kampala, Uganda via Nairobi.  That wasn’t our originally planned layover though and even though we’re not going to Bahrain, I still feel it necessary to put our song for that layover in…I apologize ahead of time if there’s a number of our readers who can’t get this song out of their heads the rest of today, but really, what other option was there for a city named Manama?