We sit in the airport in Hong Kong, awaiting the flight that will take us to our next destination: Dubai, United Arab Emirates.  Last night was spent in the airport in Singapore, where we finally got connected with the world in general, learning to my delight that the Canucks are out of the NHL playoffs and that the redneck hick vote in Alberta was actually believed to have a shot at winning the provincial election.  Blessedly, that didn’t happen.  We also learned the sad news that my sister-in-law Courtney’s mother lost her long battle with cancer in the past week.  We send our love and condolences to both Courtney and Matt.  You are in our thoughts. 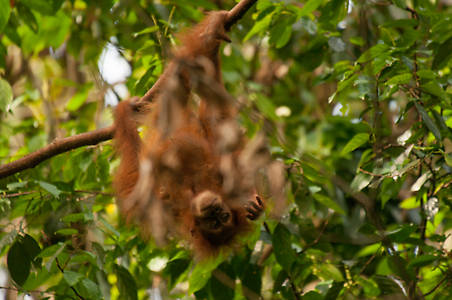 We loved Sumatra and are both of the opinion that we could watch orangutans for hours without getting tired of it.  Being in a place like Gunung Leuser, much like with the Galapagos Islands, really gives you a much greater sense of the value of the place, and the sincere hope that places like this can be cared for and preserved.  There is a great danger to the jungle in Indonesia, as the palm oil and paper industries whittle away at the edges of their rainforests on all the islands.  Considering that Indonesia has all the Sumatran orangutans and many of the Bornean orangutans on their soil (and the same concerns exist in the Malaysian parts of Borneo as well), one can only hope that the governments there do take the required steps to protect the wild areas there and that the people surrounding the rainforests can be convinced that there is a benefit to them as well in keeping orangutans, tigers, elephants, etc.  All those animals can have their conflicts with farmers and poaching whether for Chinese medicine (tiger’s testicles, gall bladders) or the exotic pet trade (baby orangutans) remains an issue.  Visiting places like this inspires one to want to help, especially when you hear people like our amazing Sumatran guide Darma (who also works at the Orangutan Conservation Center) talk about the challenges they face (including massive corruption in the government which re-directs a huge amount of the money sent internationally for orangutan conservation).   More than anything, he wants people to know of the challenges they face, and he wants people to come visit Sumatra, and so I’m happy to spread the word a little bit.

Before this post gets too deep, I should sum up the last few days of the trip…we did a couple more day hikes, did an elephant trek through a portion of jungle (and washed the elephants…I got soaked by an elephant with a sense of humour) and on our last day, we trekked about 45 minutes upstream from Bukit Lawang (our home base for most of our stay), lashed a few inner tubes together (well, our guides did anyhow) and rode the rapids back to town.  AWESOME. 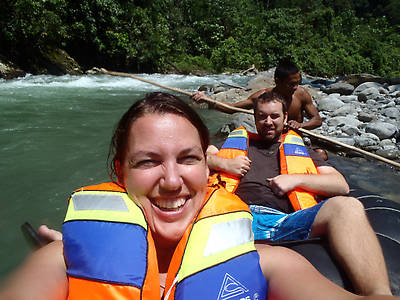 Now we’re on towards a completely different place…UAE is the first place in the Middle East that either Megan or I have touched down and Megan’s a little nervous about her wardrobe as she does not want to offend.  She’s endeavouring to make sure her elbows and knees are covered at all times, although we’ve heard that no veils will be required.

As I have two songs for Dubai and only two days there, I better post them both here.  I had planned on only this first one when I started making the list, but stumbled upon the second when I was tracking down the first song of our play list…

Almost time to catch our flight!  We’re off!