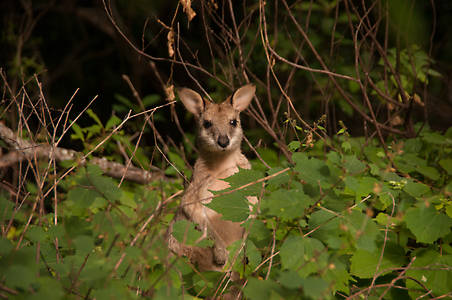 Australia is home to over 40 species of macropods, the family that includes wallabies and kangaroos.  ‘Roos have come to be associated as a huge symbol of Australia, with only the Statue of Liberty ranking higher on one poll about the most recognizable tourism icons.  As we built out our trip through Australia’s northeastern coast, focussing on the Great Barrier Reef, I didn’t realize that it isn’t exactly a hotspot for kangaroo spotting and in the first few days here, while we saw several kangaroo crossing signs, not a single animal had been spotted.  Would we miss out on seeing macropods this trip?

When we last wrote, we were planning to stay the night in Tin Can Bay.  What we didn’t realize at the time is that Tin Can Bay is a roosting spot for thousands of lorikeets, and so during our evening walk, the air was full of brilliant green & red birds.  It was a pretty awesome sight, but the next morning surpassed that as we met Mystique, the Indo-Pacific Humpbacked Dolphin.  His grandfather, Scarry, came in to Tin Can Bay injured in the 1950’s, and stayed for two months while he recovered.  The people of the town helped look after him and finally he swam back out to sea.  The townspeople thought they’d seen the last of him, but the next morning he came back again and that tradition has carried on almost every morning since.  Scarry introduced his daughter to the ritual and she in turn introduced Mystique who is now 21 and the head of his pod.  He brings his favourite female and his six-year old son in many days, but will keep any other dolphins away from the dock.  For our morning there, it was just Mystique, but it was incredible.  We stood almost knee deep in the water and he swam up directly in front of us.  The rules of conduct are very clear there…no touching the dolphin, although you are able to feed him (which we did).  He clearly knows the staff and you can tell his favourites, as he’ll come immediately up to them the second they step in the water.  It was a really neat experience and one of the few times when feeding the wild animal doesn’t seem like a big mistake. 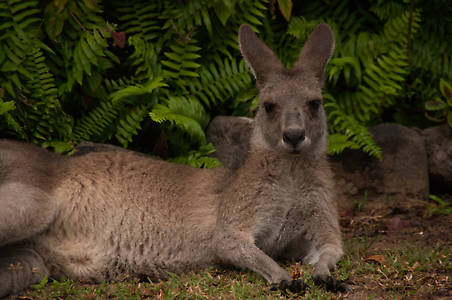 After that it was a 1000-km drive up the coast (Men at Work is an appropriate name for an Aussie band…there’s no shortage of roadwork along the highway) with a brief stop in Rockhampton to replace my underwater camera.  We pulled in to Cape Hillsborough National Park at 10:30 at night and as I got out of the camper van, I saw some movement to the side…it was an agile wallaby!  We parked and I went to brush my teeth, only to find another species of wallaby near the bathrooms.  A morning walk on the beach brought the macropod count to three species, as along with a couple dozen agile wallabies was an Eastern Grey Kangaroo.  We’d see a couple more kangaroos and several more wallabies before we left Cape Hillsborough, as well as our first snake of the trip…discovered in the middle of the path as we did a short day-hike.  That ended the hike a little earlier than we planned although we later learned it was a harmless tree snake.  The lady who IDed the serpent told us that as a rule of thumb, if an Aussie snake is thin, long and can climb trees, it’s okay, but if it’s thick and shorter, watch out.  Megan questioned the wisdom of trusting rules of thumb when it comes to potentially venomous snakes…

We ended that day sitting at the side of a pond watching for platypus, but sadly, not all of our stories can have a perfect ending and the platypus never showed. 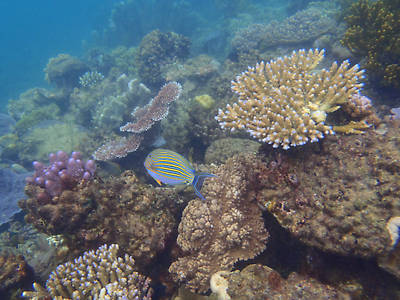 The last three days have been a bit of a whirlwind, first out on the Great Barrier Reef in the Whitsunday Islands, then racing up to Daintree to take a crocodile cruise where we saw several birds, the second tree snake of the trip and a 3.5M long croc!  And then today it was back to the Reef.  It was a wet, soggy day so a perfect one to spend in the water.  We were a little spoiled with our snorkelling in the Galapagos.  No turtles, sharks or rays in either of our trips in Australia, but there were tons of colourful fish and some pretty large ones. 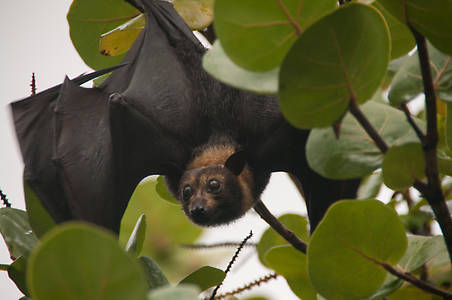 And just to give us one more thrill, tonight when we got off the boat, we saw hundreds of flying foxes heading out over the sea.  I’ve never seen a giant flight of bats, and the flying foxes are huge.  Very impressive.  One even landed to help me get a good photo of him!

Tomorrow we fly back to Sydney and then on to Indonesia (with an overnight stay in the Singapore Airport).  Australia’s been good to us…hopefully Sumatra is just as much fun.  The ultra-rare animal spottings there?  Rhinos, elephants and tigers!

Oh yeah, almost forgot the song!  There’s no snorkelling song, so I had to choose something else that’s sort of water sports-related.  We certainly caught some waves though as both times we were on the water there were 25-30 knot winds!