If I had to sum up the first five days in the Galapagos in a sentence, I might have a hard time. Fortunately, I have a whole blog entry to do it in, plus a song, so hopefully that gives me the space I need to wax on and on about this awe-inspiring place. The days here have been incredibly full, right from the first, where we rode bike through the hills of San Cristobal Island, spent time at a beach, saw our first sea lions, marine iguanas, lava lizards, frigate birds, pelicans, etc. etc. all in the space of a single afternoon. Since that point, we’ve snorkeled with sea turtles, sea lions and sharks – the sharks were harmless Galapagos sharks (although Sean and my mom saw a couple hammerheads as well), the sea lions are a little intimidating as they really can fly in the water, and the sea turtles are my favourite. I’ve now swum along beside at least a dozen of them….gracefully moving through the water at their own pace, fairly unperturbed by our presence.

I even saw my first Manta Ray in my last snorkel, a freaky experience as the water was a bit murky and he just appeared at close range behind a large sea turtle. Took him only a couple seconds to flap past me, but it was a huge thrill. On-land, the adventures have been almost as exciting, as today we saw wild tortoises and flamingos, and tomorrow we hike up the side of a volcanic crater here on Isabela Island, biggest of the Galapagos chain, and one that still has live volcanos.

Possibly the biggest excitement to date came during our crossing from San Cristobal to Floreana Island. We came across a pod of dolphins, who raced around our boat, jumping and playing, showing off some incredible water acrobatics from ridiculously close range! 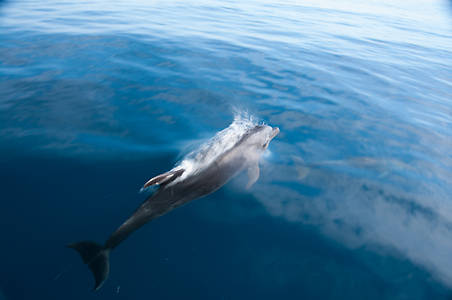 Our trip has not been without its casualties though. My sleeping bag stuff-sack got mysteriously lost along the Inca Trail. My Swiss Army knife was the next victim, falling to the authorities in the Cuzco Airport after I forgot it was in my pocket, and then my underwater camera turned out not to be as waterproof as it was billed. I still have the camera, but it appears to be on is last legs as it currently won’t turn on, never less take pictures. These are small losses really on what is already an unbelievable trip. While I hope that our other stops don’t devour my gear at the rate that South America has been, it has all been worth it so far.

With that, there’s nothing left to do but play our song for this segment of the journey, which coincidentally we heard while out for a drink tonight! Again, I can’t use the hyperlink as I’m on the iPad, but I’ll try to fix that later whenever I get the Internet again.

“Tropical the island breeze, all of nature wild and free, this is where I long to be, la Isla Bonita…”