Hello from Bukit Lawang, on the island of Sumatra, Indonesia! 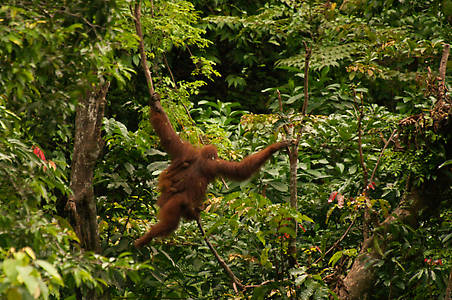 En route to a break & enter

We were picked up at the airport in Medan by our guide two days ago and we hadn’t even reached our hotel room before we saw the first primates of our trip, long-tailed macaques.  Our room is perched atop the Jungle Inn here, a really nice building looking over the river towards Gunung Leuser National Park and in the first afternoon, as we prepared to go to dinner, we saw our first orangutans across the river, a mother & daughter named Sandra and Sandray, en route to attempt a break in to the ranger’s cabin nearby in search of any fruit left lying around.

The next morning we set out on our first day hike in Gunung Leuser, where we saw Sandra and Sandray again…as well as 11 other orangutans, 4 Lar Gibbons, several Thomas Leaf Monkeys, a couple turtles and a snake.  It was more of the same today, with 8 more orangutan sightings.

The hiking is difficult, up and down very steep hills, but we’re managing well, despite the heat in the 30s which combined with the humidity feels somewhere in the neighbourhood of 40-45 degrees! 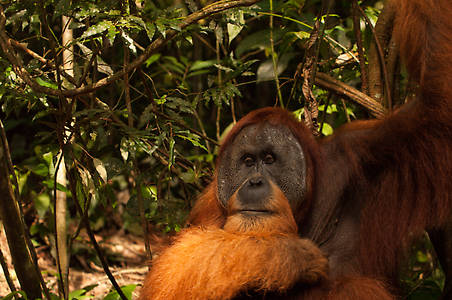 Haik – King of the Jungle

I should keep this short as it’s almost dinner time, but as internet is hard to come by here in Bukit Lawang, and this is likely to be our only entry, here are both of the songs for Sumatra on the playlist.

1) Run through the Jungle
2) Have you Ever

The second is by Brandi Carlile, who’s song “The Story” was the one we had our first dance to at our wedding!