It’s been a while since we last had a chance to write home, and there’s been so much that’s happened that it’ll be impossible to catch up on all the details.  That said, here’s the quick overview:  Galapagos was fantastic start to finish.  Saw lots more tortoises at the end, including some wild Santa Cruz Tortoises, which are pretty huge.  We left Sean and Stephinie behind on the Islands, where Sean proposed a couple days after we left as they SCUBA-ed with hammerhead sharks and manta rays.  Congratulations guys! 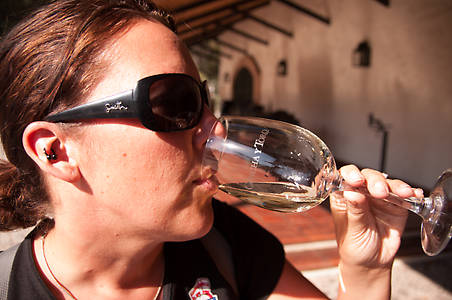 We had one last evening in Quito with Mom & Dad before leaving them as well.  Spent a little time in the cloud forest in Ecuador where we saw toucans and then headed on to Chile where we spent a day exploring Santiago, visiting a winery (Concha y Toro) and watching sunset from high above the city.

Then it was on to Australia (with a brief layover and breakfast in Auckland).  After an evening of laundry in Brisbane, we picked up our camper van and headed south to Springbrook National Park, then came back up north along the coast to Fraser Island where we’ve spent the last two days.  If I thought that driving on the wrong side of the road was tough, it was nothing compared to the “roads” on Fraser, the largest sand island in the world.  Along the beaches, you can race along, skimming the surf as you go, but inland, the tracks are bumpy and rutted…and a lot of fun!

Yesterday we spent much of the day relaxing at Lake McKenzie, a lake entirely formed from rainwater.  The water is crystal clear, and the weather was bright and sunny.  At Lake McKenzie, we also saw our first dingo!  The dingos on Fraser Island are considered to be more purebreed than those in much of the rest of Australia, as they haven’t had the same opportunity to crossbreed with dogs.  The one we saw was brazen, strolling around the parking lot and walking right past us as we stood near our truck. 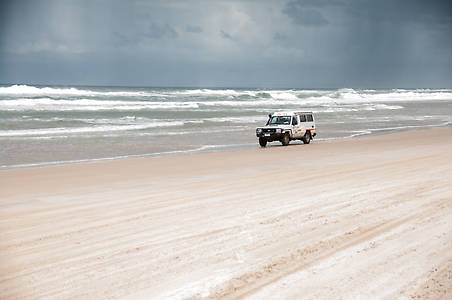 Speaking of our truck, it’s a 4WD Toyota behemoth whose roof pops up at night in order to allow us sleeping room.  We’re becoming more and more adept at arranging and re-arranging our bags and the various things inside the camper to accommodate sleeping or eating or driving.  The gypsy life looks good on us so far…and the campground on Fraser even had a shower, so we aren’t terrible smelling gypsies for the moment!

Today’s song is the obvious one, and I apologize to all my Australian friends for using it, but it does represent our present location AND is possibly the most awesomely literal music video of all-time.

Tomorrow morning we hope to see Indo-Pacific dolphins at Tin Can Bay, and then we’re on the road towards the Whitsunday Islands.