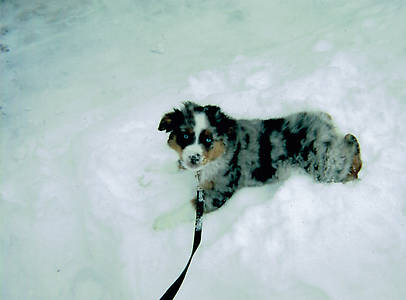 Faolan as a pup

I write this morning with a bit of a heavy heart.  My parent’s beloved dog Faolan won’t be there to greet us when we get home having lost a short battle with an aggressive cancer.  Since hearing the news, I’ve spent some time remembering his life, from the moment I picked him up at the airport several years ago, a tiny terrified bundle of so soft fur that fit comfortably in to my jacket, to races up the stairs, to his agility classes, which he loved other than the other dogs, which he did not.  He was a very intelligent, clever dog who picked up tricks easily, even ones (like rolling over) which he didn’t really like to perform.  He loved walking people to their cars at the end of a night visiting my parents, and was willing to be anyone’s best friend…as long as they had a handful of treats.  He suffered when each of us moved away from the house, knowing he’d lost one of his herd, and it was always a joyful reunion when any of us came back again.  We learned the news in a London pub where we got a brief wifi connection and it was all I could do to keep from watering the oak along the bar.  I’ll miss you Faolan.  Goodbye little buddy!

Now, in the title (stolen from a U2 song), I’ve promised happy and sad, and it IS a travel blog so I should tell more about where we’ve been and what we’ve done.  When we last left off, we were headed for the white cliffs of Pammukale, which were spectacular.  A hot spring there has bubbled up warm water for centuries, and the residue has hardened in to formations called travertines – basically naturally formed limestone swimming pools.  They have a white sheen to them that makes them look like snow or cotton and thus the name Pammukale which means cotton castle.  The waters have long been thought to have healing powers and so a Roman-era city was built adjacent to the cliffs some of which still stands.  It was said that Cleopatra herself even visited to swim in the pools.  Maybe it’s the vision of Cleopatra that inspires the hundreds of Russian girls striking hundreds of model poses against the white walls.  My favourite remains two girls who scrambled down a bit of the cliff so that they could take photos under a waterfall…caused by a very large woman sitting in a trench the water ran along, displacing buckets of water down the side.

After Pammukale, we headed to Istanbul for a day and a bit there.  Our group tour ended with a walking tour of the ancient city and some of its impressive sites, although we had such a great group that we didn’t separate, but had a last dinner together, then some drinks…and even in the morning, I went exploring Topkapi Palace with one of the guys from the tour, while Megan stayed in for a late breakfast with a couple of the girls.

Next, we headed to England – the last country on the world tour before our return to Canada!  We were met at the airport by my Irish cousin Una, who put us up at her house for the first night.  It was so nice to sleep in a real house again, in a nice soft bed…it’s been a LONG time!  We went with Una to Blenheim Palace on Sunday morning – meaning I went to two palaces in two days on either side of Europe!  I knew before I came that Blenheim is a UNESCO World Heritage Site, and that it often ends up in TV shows and movies as a backdrop when someone needs a stately home, but I didn’t know much more than that.  The history of the house and the family, that of the Dukes of Marlborough, is fascinating.  The original Duke, John Churchill was a favourite in the time of Queen Anne and was gifted the property to build his palace on after his victory over the forces of Louis XIV in the wars of Spanish Succession at a place called Blindheim in Germany (which was anglicized to Blenheim).  That a war about who would succeed to the throne of Spain, was fought between Englsh and French troops in Germany just shows how complicated European history can be. The 1st Duke’s great-great-great-great-great-great-great-grandson also played a major role in a struggle involving all of Europe.  Winston Spencer-Churchill was born at Blenheim Palace and spent much of his childhood there.  He even proposed to his wife in the gardens.  We were shown the room of his birth and the Stone Temple where he made his proposal.  His grandfather was the 7th Duke and one of his closest friends and cousin was the 9th Duke.  He loved the place and was even buried nearby. 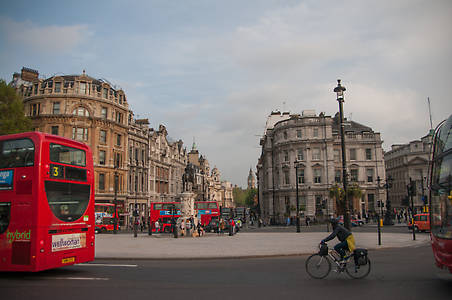 After Blenheim, we thanked Una once more for her hospitality and ventured in to the big city of London – Megan’s first sojourn in to one of the world’s great cities.  Since then it’s been a busy schedule:  The London Eye, Westminster Abbey, Covent Gardens, English pubs, Tower of London (my favourite!), Nando’s (a restaurant that’s become a Mallon family tradition on visiting London), and then last night, Megan’s first London musical, Rock of Ages.  It’s an awesome show.  80’s power balads and a lot of humour.  I definitely would recommend it to anyone.  We returned to the hotel last night humming Journey, Whitesnake and Bon Jovi.

Today should be another great night as we are having a reunion with several of the friends we made during our trip through Southern Africa in 2009.  It will be great to catch up with some people we haven’t set eyes on in almost three years and we’re only sorry that more of the crew couldn’t make it out.

For today’s song, YouTube has let me down again.  On our mix, we have a Canadian songstress named Sarah Slean and her song Little London Night.  She’s got a beautiful voice and is one of Megan’s favourite singers, so if you’re really dedicated to following our list, here’s the iTunes link.  But in case you’re not THAT dedicated to following our exact musical path, here’s another song by a Canadian band about a trip to London.  Given our partying with friends tonight, this might end up being an appropriate ballad…