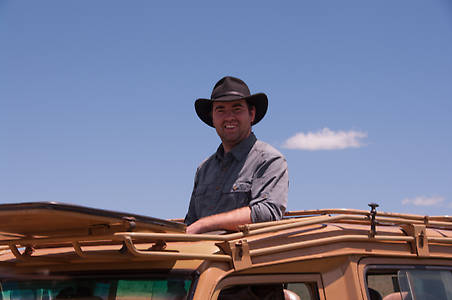 Hi and thanks for visiting my website.  I’m an amateur wildlife and travel photographer from Edmonton, Alberta, Canada.  I was always an animal enthusiast, and fell in love with travel in 2006 with a trip to England and Ireland.  Since then, I’ve been in every continent but Antarctica (some day!), and in 2012, circumnavigated the globe with my wife Megan (who also doubles as both my travelling partner and photographer’s assistant and who has taken several of the photos found on this site – most of the ones that have me in them!)

When I began travelling, I also began my photography hobby.  Years ago, my parents had hung photos my dad took on trips to Italy and Ireland, and I always thought it cool to be able to point to the photos on the walls and know that you were there, and took that shot.  When my second international trip was to Kenya and Tanzania in 2007, I felt the need to step things up a level and bought my first SLR camera, a Pentax K10D and my first zoom lens.  I’ve been snapping photos both at home and abroad ever since and hauling more and more gear around the world with me.

This site was born out of the wish to display photos from our trips, along with my wildlife project, The Ark – in which I continue to assemble a collection of photos of every animal I’ve been able to photograph. As of February 2014, when I first wrote this intro, that number was just above 700, with several species of birds and reptile yet to be identified. Three years later and the count has reached 989. The countdown is now on until I crack 1000!

I hope you enjoy the site, and I’m always happy to talk about the places I’ve visited, so feel free to leave a comment on the site, or e-mail me at adam.mallon@gmail.com.


by Adam with 2 comments.